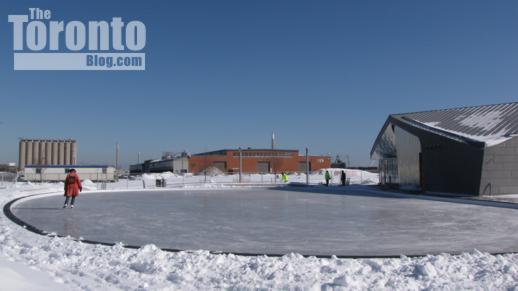 A solitary figure skater on the new rink at Sherbourne Common

Ice Time: Sherbourne Common was an eerily quiet and almost lonely place last when I dropped by last Thursday afternoon to check out the brand-new outdoor skating rink which had just opened to the public at the beginning of the week.  Besides me, there was only one other person in the entire place who wasn’t a City of Toronto parks and recreation department employee — and she had the entire rink all to herself (which, judging by her beaming face, she was quite enjoying).

It was around noon, and I had been certain I would arrive to find the rink packed with workers from the nearby Corus Quay office building getting in a quick skate during their lunch break. But the two of us were outnumbered by no fewer than seven civic employees who were busy shovelling snow and digging up the ground behind the shiny silver washroom and snack bar pavilion next to the ice oval.

It was a bitterly cold day, to be sure, but it was brilliantly sunny — an otherwise perfect day for outdoor enthusiasts to get some fresh air and savour the park’s panoramic views of the city skyline and the frosty Toronto Islands. And to take a peek at the early stages of development of downtown Toronto’s newest neighbourhood, East Bayfront, before the whole area gets built up with offices, condos and colleges.

Downtown Toronto’s newest public space, Sherbourne Common sits at the foot of Lower Sherbourne Street, between the Gardiner Expressway/Lake Shore Blvd. East and Lake Ontario. The Common is divided into two distinct park areas by Queen’s Quay, the broad boulevard that turns onto Parliament Street at its east end. Even at the height of summer when trees, plants and flowers are in full bloom, Queen’s Quay is one of the ugliest, bleakest streets in the city, if not the entire country. Thankfully, Sherbourne Common has come to its rescue, providing a pleasant stretch of green space to break up the dreary industrial gloom and greyness to the east.

The south section of the park — where the rink and pavilion are situated — officially opened last fall. The north section is still under construction, but work on playgrounds, water sculptures and a water channel is nearly finished. (The city anticipates the north Common will open as early as March or April.)

Even during the throes of a winter deepfreeze, when there’s nothing green in sight, Sherbourne Common and nearby Canada’s Sugar Beach were a treat to visit. I found both parks incredibly peaceful, even though the new waterfront campus of George Brown College is under construction right next door and more than a thousand people work at the Corus Entertainment building next door to that. I’m sure it will be a totally different story come summertime, when I’m sure the place will be crowded with Torontonians discovering a new waterfront place to hang out. And once the new George Brown College Health Sciences building opens for the fall 2012 semester, you can bet the days will be rare that there’s nobody to be seen at the parks and beach.

In the meantime, here are some photos of the near-empty parks and beach under a fluffy blanket of fresh snow. (For more information about Sherbourne Common, click on this link to a recent article by Toronto Star urban issues and architecture columnist Christopher Hume.) 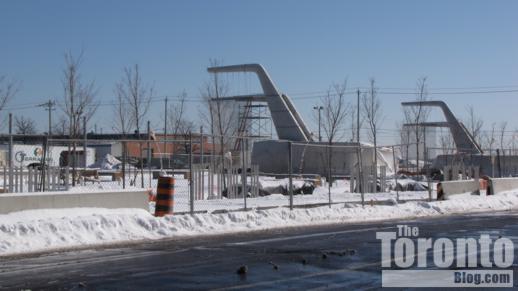 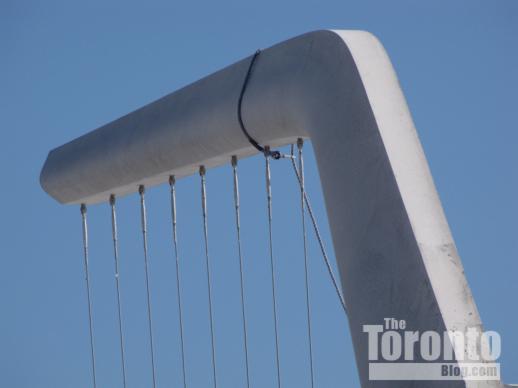 One of the water sculptures under construction at North Sherbourne Common 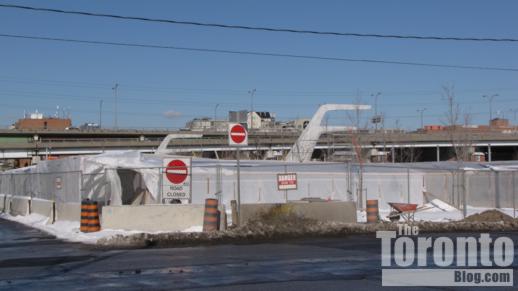 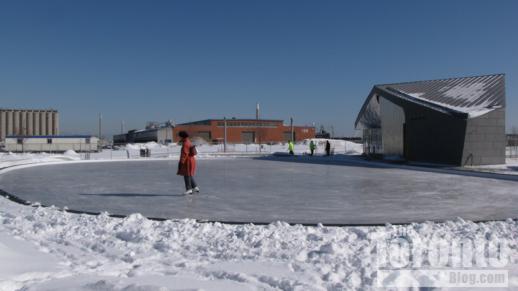 Another view of the new skating rink in the south park 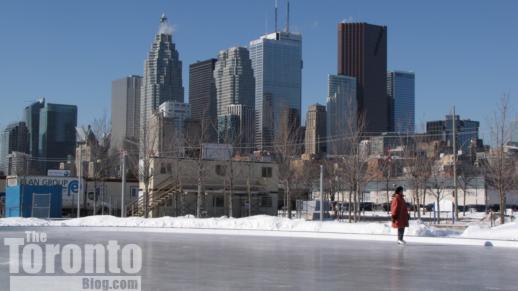 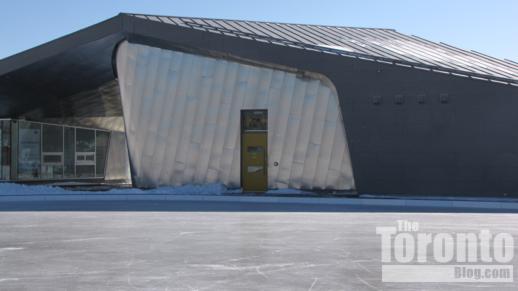 The washroom, changeroom and cafe pavilion next to the skating rink 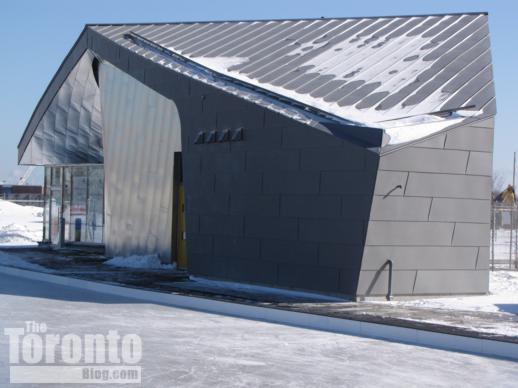 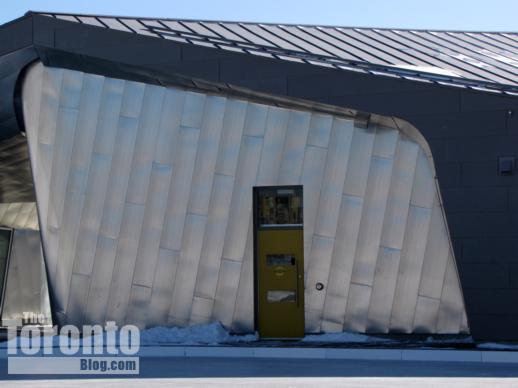 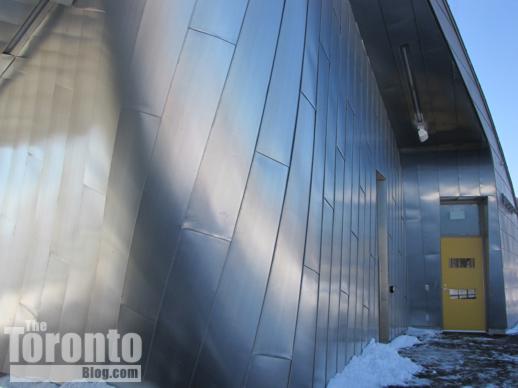 Shiny silver cladding on the pavilion 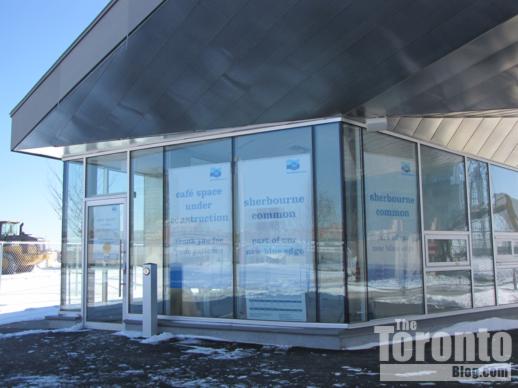 Cafe space in the rinkside pavilion 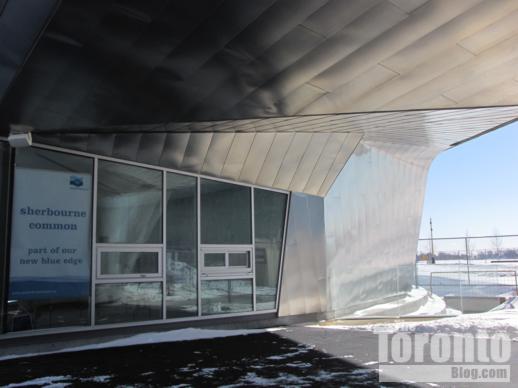 Cafe space in the new pavilion 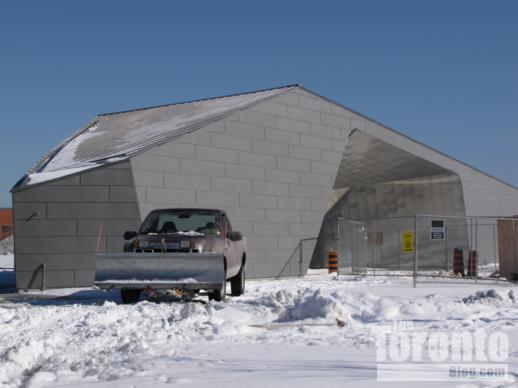 South side of the pavilion at Sherbourne Common 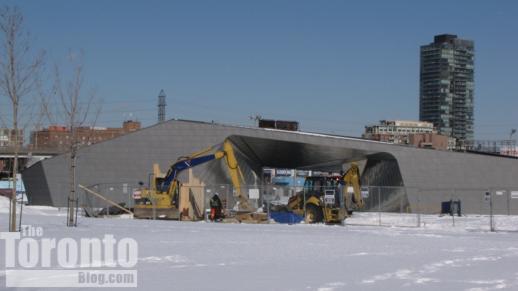 Crews doing maintenance work next to the pavilion 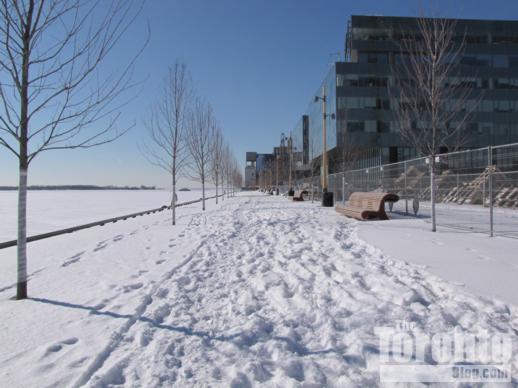 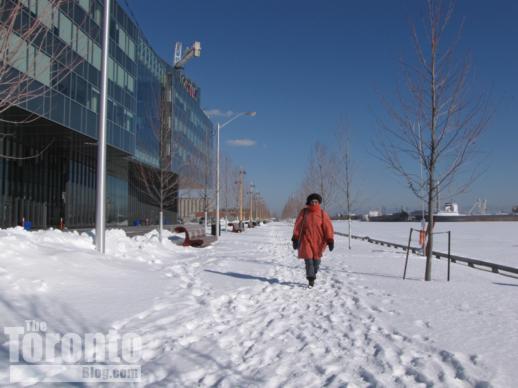 The lakeside promenade, looking east from the Corus Quay building 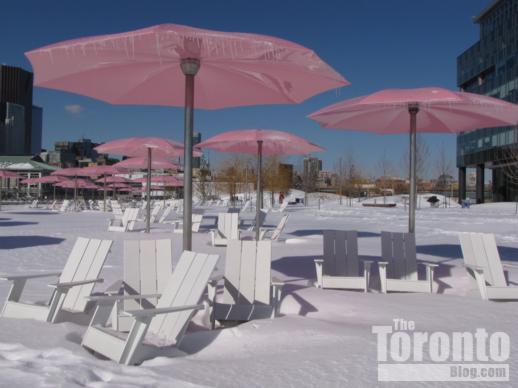 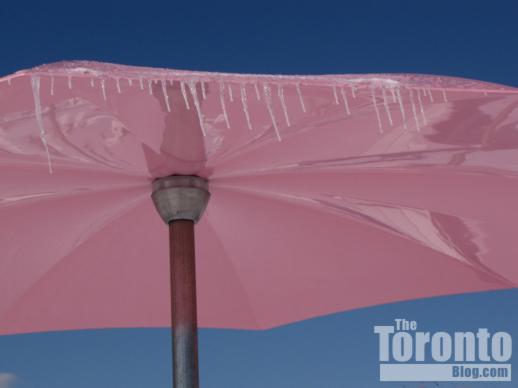 Icicles dangle from one of the pink umbrellas at Sugar Beach 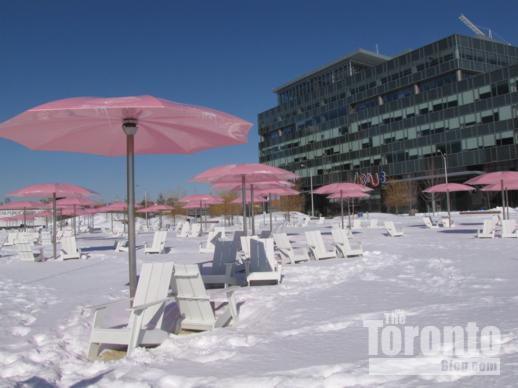 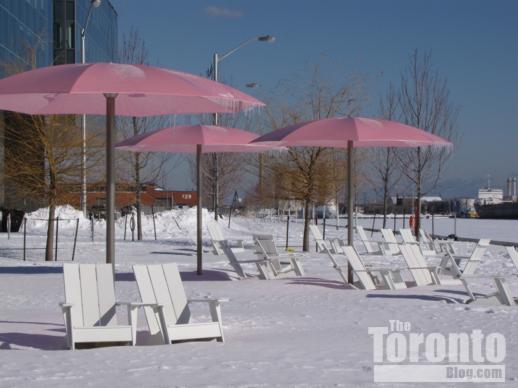 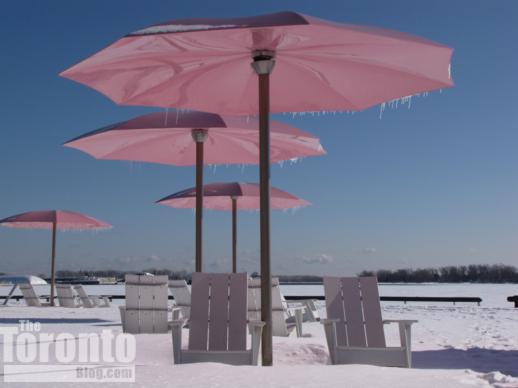 Umbrellas cast a pinkish hue on the snow 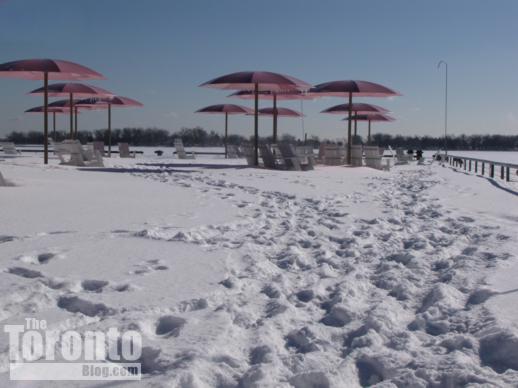 Bootprints in the snow at Sugar Beach